You are here: Home / Creative Power / What’s your journey? 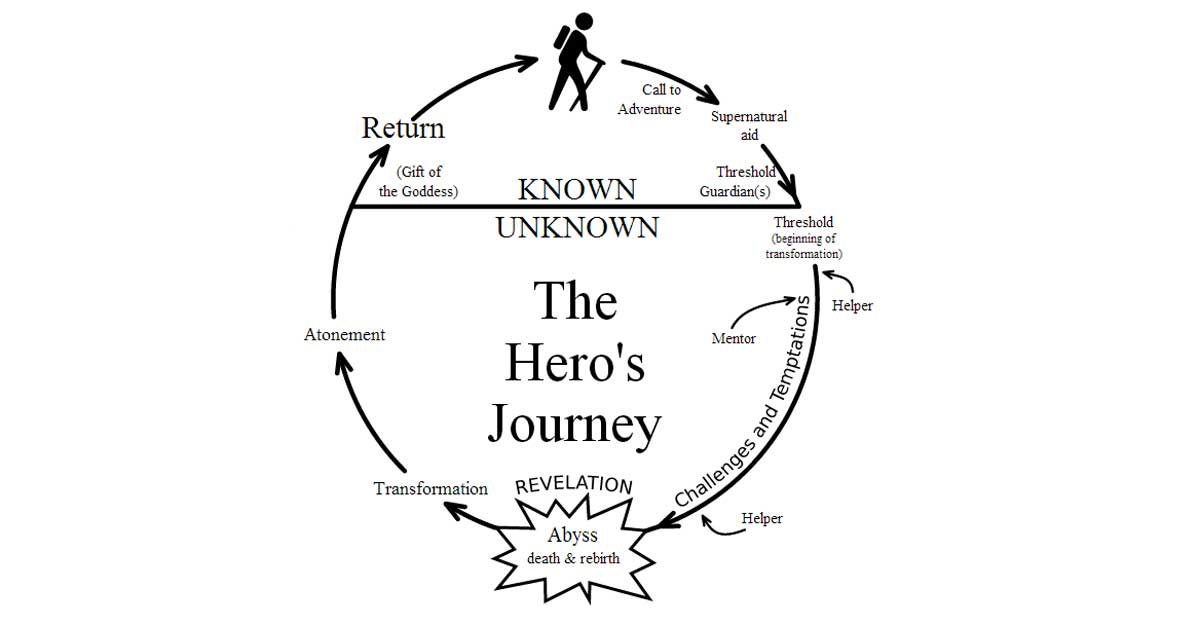 “We shall not cease from exploration, and the end of all our exploring will be to arrive where we started and know the place for the first time.” — T.S. Eliott

George Lucas’ film “Star Wars” is the archetypical story of the Hero’s Journey.

If you follow the exploits of Luke Skywalker in the above graphic, you’ll see each step of the adventure he took. In fact, it’s almost absurd to see how Lucas followed the “template” to a “T.”

It makes you want to kick yourself and say, “If only…”

Disney bought Lucasfilm for a bit more than 4 Billion Dollars (yes, that’s a “B.”) They made all that money back with the last three Star Wars films they released.

If you go through each of the films, you’ll see precisely the same pattern. Here’s a fun little video with Kurt Vonnegut (“Fahrenheit 451”) explaining how to write a story.

You can take that formula and make millions. It’s a formula that has proven itself for over ten thousand years. It is part of our human soul.

Here’s the big news, though. You are on a Hero’s Journey of your own.

Don’t worry; you won’t have to meet Greedo or Jabba the Hut. You won’t have to blow up the Death Star. If you examine your life, though, you’ll see similarities to the Hero’s Journey in your own life.

The Hero’s Journey is an archetype. An “archetype” is an original model of which all things of the same type are representations or copies. The psychologist Carl Jung believed archetypes are part of the experience of humankind. They pass to us through our unconscious. In effect, the archetypical story is as much a part of us as our physical being.

You can think of the first half of your life as the right part of the circle. In our youth, our lives are chaotic. We’re experiencing life to its fullest. Some of our actions process well for us — some not so much! We have mentors and guides along the way — teachers, clergy, parents.

At some point, we will experience death and rebirth as a new human being. Our life will take on new meaning, and we’ll return to the source of our journey a new human being. This coming full circle is what Eliott alludes to in the above quote.

If we’re lucky, we’ll begin a new Hero’s Journey. This time, we’ll avoid many of the mistakes we made the first time around.

It’s the second half of the journey that excited Bill. He hoped that he could inspire his fans to be reborn through the gift of art. As their guide, he helped his students and fans for most of his career.

Alexander Art continues Bill’s legacy. We encourage you to begin your Hero’s Journey into the wonderful world of art. Get in touch with the inner artist that is the source of your creative power. Let Bill and Tom and the other artists on our website be your guide to adventure and creativity. Click here for more information on the courses we have for you.