You are here: Home / Confidence Corner / Why you’re not learning to paint! 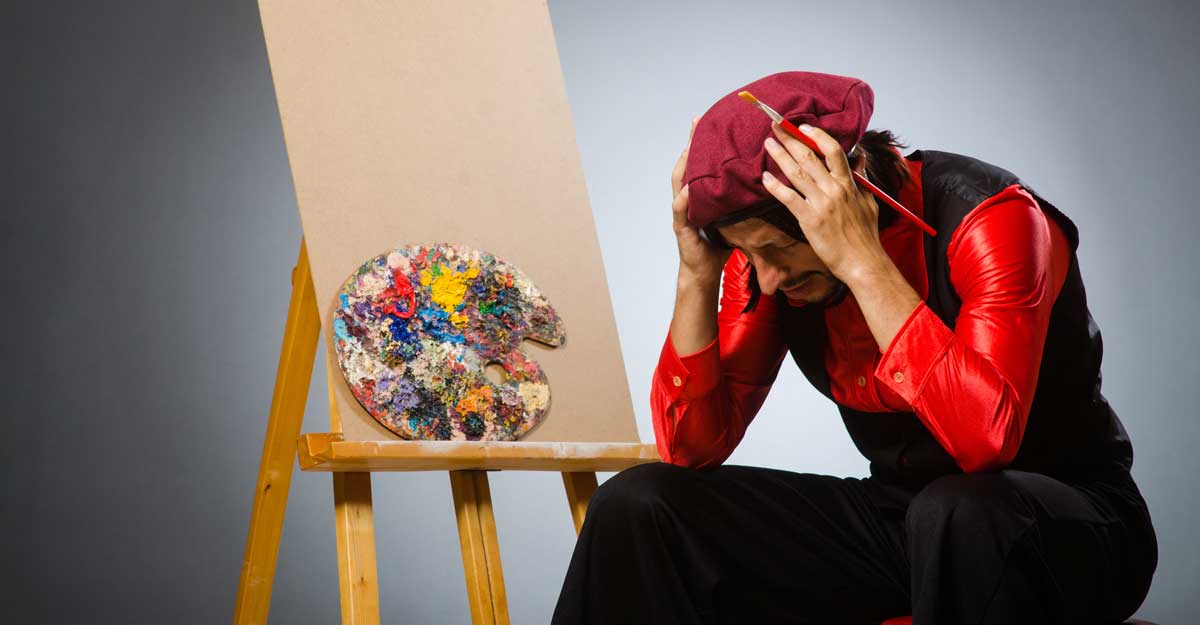 The Buddha said, “Life is suffering.” Does that also apply to learning to paint? We’ll find out in a bit.

Let me ask you this first. Have you ever cried in front of your canvas? Or, have you ever yelled at it? Has the canvas frustrated you, perhaps to the point of quitting? How many times have you wiped off a canvas to begin again?

So what’s going on?

I doubt you remember when you were two years old. Scientists tell us our brains are not wired for those types of memories.

But you can watch two-year-olds and see what happens.

What do two-year-olds do when they don’t get what they want?

Yep, they burst into tears. Or worse, they throw temper tantrums.

When my oldest son was two, he was mad at his mother and me about something. I can’t even remember what it was. But he threw a temper tantrum. I mean this was a full-blown, blue-faced, flat on the floor, banging with both fists, tantrum.

I have to admit; I stood in awe of the performance. My wife and I watched this for about two minutes, and then we both burst into applause. We cheered. Only the academy award winner for 1979 exceeded his performance that day.

Of course, he couldn’t quite make sense of our response, but the tantrum ended almost as abruptly as it started.

But that’s what two-year-olds do, isn’t it? And that’s what seizes us in front of the canvas from time to time. We revert to our most basic human circuits. It’s automatic; we can’t help ourselves.

So does that mean that whenever we learn something we have to be in pain? Is life suffering when it comes to learning to paint?

How about those times when you learned a new skill, or you mastered a challenging technique. How did that make you feel? It was an exhilarating experience, no?

Here’s why you’re not learning to paint.

You’re trying to learn it too fast!

If, though, you get the rate just right, you’re opening up the possibility for a dopamine kick when you “get it!” (Fist pump!)

To withstand suffering your life has to have meaning.

Viktor Frankl proved that in his research. Almost every survivor of the concentration camps had a reason to live. It might have been to find a lost family member. It might have been, as with Frankl, to publish his life’s work. It might even have been to get revenge for mistreatment at the hands of the guards. Living a life of meaning allows you to withstand an incredible amount of pain.

So back to painting.

You made a mistake! It causes you suffering. You learn something about what you were doing. You don’t make that mistake again. You’ve adapted. You’ve changed as a human being.

That’s the cycle. Psychologists tell us that the way you learn through pain is the oldest reality there is. It’s as old as our nervous systems (like temper tantrums).

You learn to reduce your potential for pain at a rate you can tolerate or, perhaps, even enjoy.

Here’s something else you have to accept.

To grow, you have to die a little.

You have to be willing to let go of a part of you so that you can grow stronger.

And that’s tough to do.

Some folks are unwilling to let go. It’s too uncomfortable. And so, little by little their creative power is dying inside them.

Until that spark goes out, though, you can rekindle it into a raging fire that can take you to unimagined heights.

Bill understood this when he said, “You are the greatest artist that ever lived.”

So…what are you going to do? Are you willing to let that inner voice that’s been holding you back all your life continue pulling you down? Or are you willing to allow it to die so that you can be reborn as the artist you’ve always wanted to be?

Check out Master Class at this link.

Not a member yet? Join Us Here for FREE!