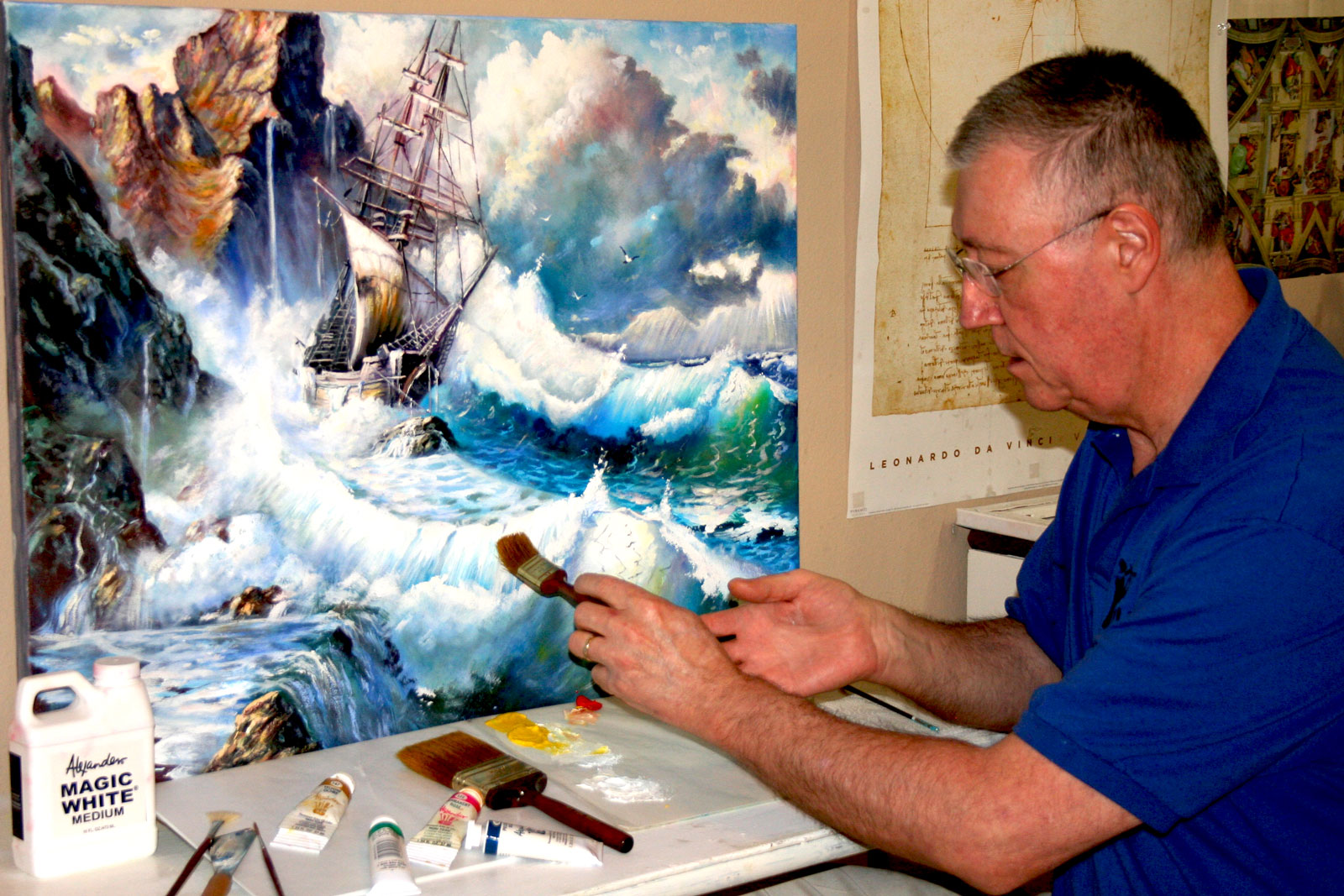 Tom Anderson is a native Californian. He studied at the College of Arts & Crafts in Oakland, California. Even as a young boy, Tom had the ability to draw. He would copy paintings from his parents’ encyclopedia. Drawing in pencil, Tom copied the works of Michelangelo, Donatello, and others. He taught himself all the body’s muscles and their movements.

He was always at the head of his art classes because of his gift for drawing and painting. He entered art contests and won awards. He worked full-time while attending junior college where he enrolled in drawing classes. Live models were valuable in developing his artistic abilities. He also attended cartooning classes where he learned the use of ink and watercolors.

Later, Tom began to study oil painting with a local artist. As soon as he began to work with oil paints, Tom knew that this was the art medium for him. Tom was looking for a way to capture the vibrant colors in the world around him. Once he realized oil could do that, Tom wanted to share his enthusiasm for this new medium with everyone. He knew, though, that now he needed to find a teacher who specialized in oil painting.

After a long search, Tom discovered Bill Alexander. He learned how Bill fulfilled his students’ dreams to become both artists and teachers. Bill had an electric personality that inspired Tom to go out and teach, teach, teach!

For the next two decades, Tom taught wherever he could. He wanted, like Bill, to change the lives of his students with this beautiful technique. Tom taught at people’s homes, then in retail stores. In 1993, he and his wife, Lynda, opened their studio in Northern California. Tom instructed beginning to advanced students in group classes. He also gave private and semi-private lessons. Soon, a paint manufacturer began sponsoring him at trade shows. Tom began teaching other artists Bill’s technique. Tom taught at various schools and senior and community centers in the area. Tom also had a weekly public access television program. He taught tens of thousands of new students his teaching methods. Tom grew to be comfortable in front of the camera and loved reaching out to his fans. Tom and his wife, Lynda moved to McKinney, Texas, in December 2008 to be near their family.

There is no artist alive who better understands Bill’s techniques and methods than Tom. He spent decades watching, reviewing and dissecting Bill’s videos. He practiced Bill’s techniques until they became second nature. Through a lifetime of studying a master, Tom discovered the secrets of Bill’s method. These were secrets that Bill had no time to explain in his short videos.

Tom’s respect for Bill has never waned. His dedication to Bill’s mission is exemplary. Alexander Art is proud to appoint Tom as Alexander Art Master-Artist-in-residence.

For the past two years, Tom and the staff at Alexander Art worked on an online version of Tom’s art curriculum. Tom taught this program to tens of thousands of students over the last twenty plus years. Many of Tom’s students went on to become artists and teachers themselves. Tom is the instructor of Alexander Art’s new “You Can Paint” Master Class. You can read more about the course here.

Tom is an art historian who has visited all the major art galleries around the world. Tom has also been instrumental in helping Alexander Art make painting safer for artists. Tom discovered a 500-year-old secret for a cleaning solution that contained no thinner. His in-depth research helped Alexander Art remove harmful petroleum byproducts from our Magic White™. All our products are now free of toxic chemicals and solvents thanks to Tom. Tom also helped Alexander Art develop a new Magic Clear™ Oil Medium. We now have a crystal clear oil based on the formulations of nonother than Leonardo da Vinci himself.

Bill made it possible for Tom to have a satisfying and profitable career in art. Tom has never forgotten what Bill did for him and honored him in our new art course. I have never met another individual who honors his teacher and mentor as much as Tom acknowledges Bill.

Want to be a more confident, successful artist? Download this guide and start creating beautiful art! Just enter your email address and we'll send you the guide.